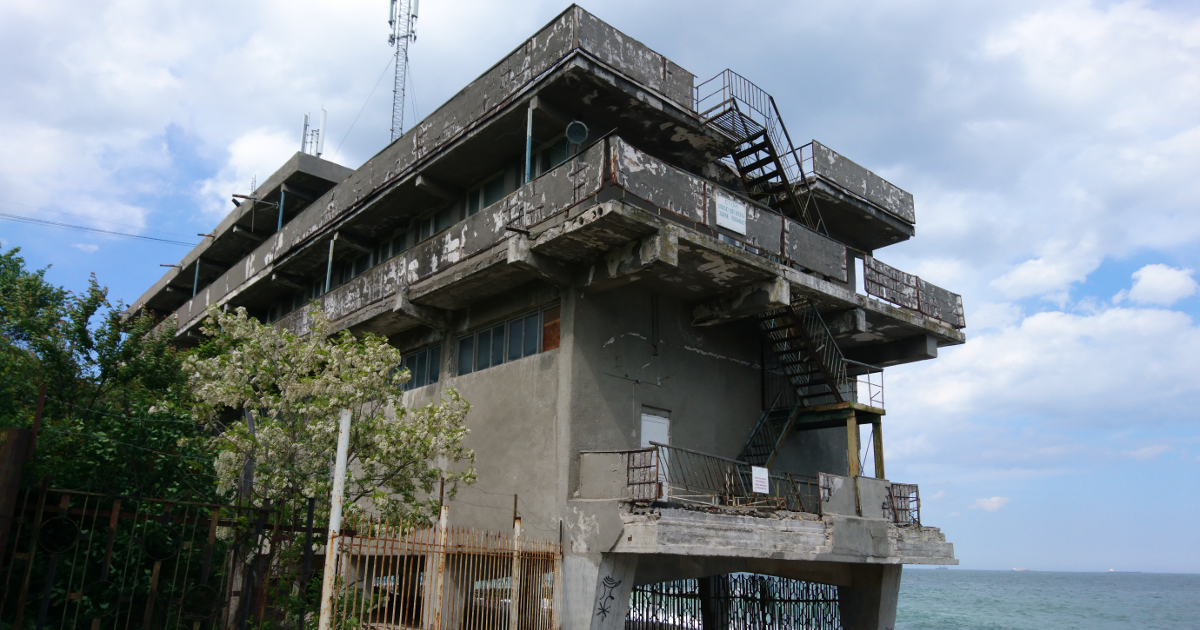 It is Saturday and our last day in Odessa. Tomorrow morning the plane will return us to Germany. The streets are filled with crowds, more than usual. Today seems to be a special day. Stalls are set up in various streets, it looks like a mixture of flea market and street party. The street musicians are also more numerous than usual. In addition to the accordion, the violin is played, sometimes also the saxophone. Guitars, on the other hand, rarely seem to play a role in the musical world of Odessa. On the way back to the hotel, a clown greets to me in French. I can’t resist to exchange a few french words with him. Finally he switches over to English, what he speaks amazingly well. With a tough russian accent, he asks me where I’m from and warns me from pickpockets. He comes out as a globetrotter, in Germany he already was.

After a very likeable small talk I ask him for a photo, to which he agrees. The evening is followed by a warm farewell to the people who have become dear to us during our stay. They also are sad when they hear that we have to return to Germany tomorrow. The next morning, a taxi brings us to the airport of Odessa very early. The airport is not very large, which is why there are no direct flights to Germany. After the security check, it goes into the waiting area. There we meet Jeffrey, a sonny boy from Texas. He is well-trained, tanned, has long hair, wears flip-flops and his English is not like a Texan but instead easy to understand. He complains about the security control staff, which he calls as „friendly like a punch in the face“.

We start talking. Jeffrey also has spent a few days in Odessa, but he is not as impressed by the mentality and the women as we are. He tells us that he lives in Thailand, runs a scooter rental business there and he is a passionate diver. He lives with two women because he cannot decide for one. This does not seem to be a problem at all. I tell him about our experiences in Odessa and bring him and his companions to amazement and amused looks. Thanks to our lively conversation with the American, the waiting time passes quickly and so we sit in the machine shortly after, which brings us to Kiev. When we get off in Kiev, it rains, the temperatures are cool and on the runway blows an unpleasant wind. I have to think of Jeffrey with his flip flops, but he seems to be tough.

After exchanging the contact details with Jeffrey, we take a seat in the waiting area for boarding our connecting flight to Munich. From here we hear german voices again for the first time. Together with us, a delegation of the motorcycle club „Bandidos“, who seem to had a big club meeting in Kiev, is also waiting. Although these guys look dangerous at first glance, but they do turn out to be laid back contemporaries. However, I suspect that nobody here tried to rip off these guys in any nightclub. Otherwise, this club would have probably closed for a long time. When boarding the plane, an elderly ukrainian woman talks to me about my T-shirt, which I bought in a souvenir shop in Odessa. She notes that the inscription is written in typical slang of Odessa. I can neither confirm nor deny this, as I have not quite gotten these subtleties out yet.

Barely two and a half hours later our plane lands in Munich. It does not rain, but it is cloudy and windy. When we wait at the airport for the train, Rudi buys two pretzels and we see that here in Germany is practiced some rip-off too. In the further course I realize that I will probably need some time to acclimatize myself here again. I do not feel like I’ve missed anything during my nearly two-week absence. Wicked tongues claim that we could be glad to be back in a safe country where the women do not all want us to scam. However, I take the view that women do the same in our country, but less obvious. In Germany, they are merely endeavoring to harm one in a more subtle and sustainable way.

When I leave the train station and I march through my place of residence, the feeling of having landed in a ghost town overcomes me. It is deathly quiet and I do not meet a single person, a strange feeling. After nearly two kilometers, I reach my apartment, unlock the door and look forward to a shower with non-chlorinated water. Even the bed is tempting after the exhausting journey, I can hardly resist to it. A little sleep certainly cannot hurt before everyday life and german order catch up with me again. Luckily tomorrow is a holiday.

I also have made a gallery with commented pictures. Actually, it’s only available in German. I’ll do this in the next time.